We don't need laws that give special status to inane irrational beliefs that some state bureaucrat categorises as "religion". 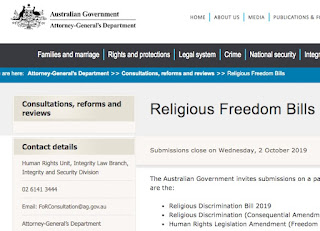 What we need is freedom and tolerance.
Freedom to say anything short of direct incitement to violence and tolerance of a wide diversity of opinions.

The old intolerances of the 20th century towards homosexuality, foreign language users, asians and others have faded, yet the sensitivity towards these prejudices has vastly increased ensuring an uninterrupted focus from the press.

New intolerances are often supported by businesses that see profit in jumping on bandwagons. New intolerances have also been written into law (18C), regulation and employment contracts.

The debate is so irrational that supporters of more state control of speech regularly conflate hate, intimidate, humiliate, insult, and offence as if they were the same thing.  But the conflation should be irrelevant as none of these things should be illegal, even if some of them are hateful.  Only, direct incitement to violence should be illegal.

If only the Australian government recognising the obvious, logical, simple and effective maxim: fewer laws = more freedom; and just repealed 18C.  Instead, they are making a new law to protect a weird and highly selective collection of stupid irrational beliefs that we call religions. Giving these weirdos special protection is the first step toward the reintroduction of blasphemy laws !

Religion should not be a "protected" anywhere. It is not an "involuntary attribute" like sex, race, disability etc. It is a choice - like barracking for Collingwood.  If an employer does not want to hire Israel Folau because he says nasty and stupid things, or just because he is a Christian that should be their right. But it is not the business of government.

There should be no laws relating to religious intolerance.

The fact that a whole bunch of people said nasty and stupid things about Israel Folau is, like his sacking, unfortunate intolerance. Again, it is not the business of government.

There should be no laws relating to religious intolerance.