In my life: first books

My parents believed strongly in the power of reading to support learning and thus education and thus success in life.  My mother told me that I fell in love with picture books well before I could speak, and learnt to read easily and quickly.

I have no specific memories of being read to by my mother or father. Neither has my father although he is pretty sure that it happened ! It is sad that so much of the wonderful moments of childhood are not able to be recalled in adult life, but we comfort ourselves in the belief that they form a subconscious foundation belief in being loved and valued. 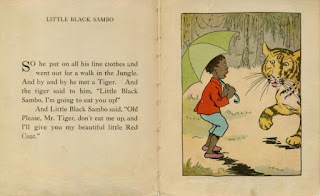 I was as scared as "Little Black Sambo" at the fierce tigers demanding clothes and other belongings. The tigers defeated themselved by their infighting and ended up as butter on pancakes !
This book was later issued as a vynl recording that Dad brought home from work at the World Record Club and included memorable songs to accompany the action.
In this millenium, most parents would probably be afraid to be caught exposing their children to the streotypes used in the text and illustrations (while happily and subliminally replacing them with whatever were the currently acceptable stereotypes). 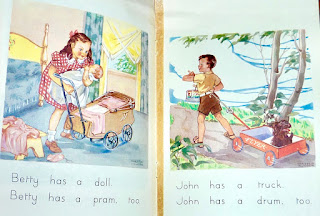 I probably met "John and Betty" in grade 1 (age 6, 1960)
During grade 2-6 (age 7-11, 1961-1965), I began reading more and more independently and insatiably: Madeleine series (Bemelmans);  The Water Babies (Kingsley); The Borrowers (Norton); Charlotte's web (White); The Famous Five series (Blyton); The Chronicles of Narnia Series (Lewis); The Cossacks and "Save the Khan" (Bartos-Hoppner) etc etc etc.
These titles are just some that spring immediately to mind, and some may have been read to me before I was an independent reader.  Each still evokes its particular excitement and desire to revisit - already with my children - and hopefully with my grandchildren.
Once I had mastered code of written language, the rewards were immense.  I had a ticket of entry into a seemingly limitless array of virtual worlds that have enticed me for the rest of my life.
After being told to "go to bed" (from 1961 I had my own room), I would resume the adventure and read until I fell asleep.  The bed has been my preferred reading location all my life.  In recent decades, the text is usually displayed on my iPhone rather than on a paper page - and, as I get older, sleep interferes more quickly !
In the early 1960's. I was introduced to many major stories from Western Culture through the "Classics Illustrated" Comic Series and "The Bible in Pictures".  The effect of text integrated with illustrations made the stories vivid and easy to navigaet. I tried to sell these experiences to my children with mixed success.
My next specific remembrance of reading was in 1967 at 79 Broadway, Camberwell, during an absence from Year 7 school of many months due to glandular fever that developed from food poisoning caused by eating cabana from Camberwell market on the way home from school.
During these months, I devoured books provided from school.  The most memorable memory is of reading the Hobbit followed by The Lord of the Rings trilogy by JRR Tolkein. I remember finishing the final pages of the final book on a "literally" dark and stormy night to the accompaniment of thunderclaps !!! I tried the Hobbit on Lucy but the attack of the spiders gave her a powerful hallucinogenic nightmare so I don't think we persisted. From 2001, I was privileged to enjoy the movie version both directly and vicariously to enjoy the movie version with Lucy and Sam with parts released each "boxing" day.
My wife, Lib, and I recognised the importance of encouraging and assisting our children to be skilled readers who love to read.  Unlike the learning of spoken language, there are no natural genetic structures to help the child, making parents so crucial.  We are delighted that our children made the most of this immense but intangible gift, and are passing on the same culteral advantage to our grandchildren.