Facebook happy to censor for anyone to keep growing 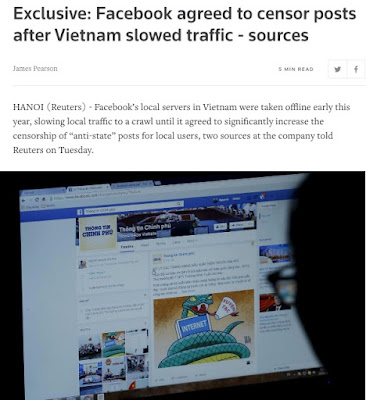 Many like to get upset about censorship in Vietnam, or China or Russia, but fail to see that these countries are enabled by the behavior of western governments and companies.
Facebook and Twitter are expanding their censorship technologies in the west against a wide range of specific views as demanded by “progressive” groups and governments.
Speech is becoming less and less free around the world - not just in commie countries.

Facebook, Google and Apple and many others are increasingly restricting the free flow of information everywhere to appease both governments and the tastes of the online mobs that Facebook wants to retain as customers.
As private companies, they have a  right to do that, but it is very sad to see that among all the bandwagons that companies love to be seen on, free speech is never one of them.  The reason for this is that they know that their customers do not value free speech.

“Facebook’s local servers in Vietnam were taken offline early this year, slowing local traffic to a crawl until it agreed to significantly increase the censorship of “anti-state” posts for local users, two sources at the company told Reuters on Tuesday.”
Amnesty International: “Facebook’s compliance with these demands sets a dangerous precedent. Governments around the world will see this as an open invitation to enlist Facebook in the service of state censorship,”
https://www.reuters.com/article/us-vietnam-facebook-exclusive/exclusive-facebook-agreed-to-censor-posts-after-vietnam-slowed-traffic-sources-idUSKCN2232JX